The Yak-52 is a two-seat aircraft, originally designed as a primary trainer for students who would later transition to Soviet jet aircraft, such as Migs and Sukhois. With its retractable tricycle undercarriage configuration its a very safe and strong aerobatic capable aircraft with G-Force / load limits of +7 and -5. The aircraft is powered by a 360hp super-charged 9 cylinder radial engine, with an inverted fuel system which permits inverted flight for as long as two minutes! A unique Russian design feature of the aircraft is the pneumatic system. Air pressure operates the brakes, flaps and landing gear as well as engine start. This provides for great reliability and safety. With a maximum weight of just over 1300kg, plus a 360hp engine, it’s a light and agile airplane with a lot of grunt. This gives the aircraft a great power to weight ratio and a climb rate of nearly 1,500 feet per minute.

With its incredible structural strength and the Supercharged 360 hp engine, this aircraft is sometimes referred to as the Harley Davidson of the sky.

The paint scheme on the aircraft is that of the top scoring allied fighter ace of WW2, Ivan Kozhedub of the Red Air Force.

Kozhedub holds the record for the highest number of confirmed air combat victories of any Soviet or Allied pilot (effectively the Allied “Ace of Aces”) during World War II. He is regarded as the best Soviet flying Ace of the war. Kozhedub’s World War II record consists of:

There are 62 stars on the side of the fuselage, which reflects the number of enemy aircraft shot down. 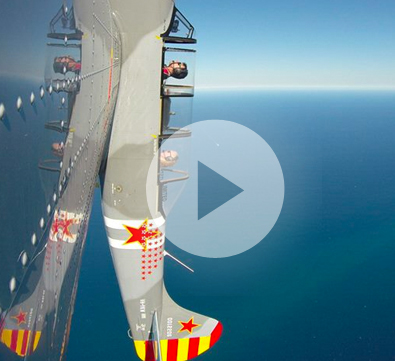 The Cessna 182 Skylane is an American four-seat, single-engine light airplane, built by Cessna of Wichita, Kansas.

It is an all-metal (mostly aluminium) aircraft, although some parts – such as engine cowling nosebowl and wingtips – are made of fiberglass or thermoplastic material.

Introduced in 1956 as a tricycle gear variant of the cessna 180. In 1957, the 182A variant was introduced along with the name Skylane. As production continued, later models were improved regularly with features such as a wider fuselage, swept tailfin with rear “omni-vision” window, enlarged baggage compartment, higher gross weights, landing gear changes, etc.